A Boeing Co. program that speeds production by letting mechanics inspect their own work is leading to repeated mistakes on the 787 Dreamliner production line in North Charleston, workers say, at a time when the airplane maker is facing worldwide scrutiny over its safety record. Some of the mistakes are serious safety hazards, like debris being left in the sensors… Read more »

One hundred and forty-nine passengers and eight crew members were killed March 10, 2019 when Ethiopian Airlines Flight 302 crashed within minutes of takeoff from Addis Ababa, Ethiopia. The plane, a new Boeing 737 MAX 8, was en route to Nairobi, Kenya, and carrying passengers of 35 different nationalities, including 22 UN staff members and eight Americans. The crash was… Read more »

Following Sunday’s crash of Ethiopian Airlines Flight 302 from Addis Ababa, Ethiopia, to Nairobi, Kenya, passengers all over the world are concerned that the Boeing 737 MAX-8 may not be safe. The reasons behind the Ethiopian Airlines crash of the new Boeing jet are still unknown, but the crash left no survivors, and this tragedy is the second loss… Read more »

Ethiopian Airlines Flight 302 from Addis Ababa, Ethiopia, to Nairobi, Kenya, crashed shortly after takeoff on Sunday morning. The airline’s CEO has confirmed there are no survivors from the crash, which took place minutes after takeoff from Addis Ababa. The airline announced there were 149 passengers and 8 crew members on board. The passengers were of 35 different nationalities, including… Read more »

Five years ago, a Malaysia Airlines Boeing 777 went missing. We came know the call letters MH 370 and added words to our vocabulary such as pingers, 7th arc and Inmarsat. For months, the world was transfixed by news of the search. Private citizens scanned satellite images trying to find clues to help find the plane. Debris became the only… Read more » 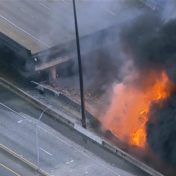 The Atlanta bridge on I-85 that collapsed this week was not on the list of America’s most structurally deficient bridges. So why did it fall if it was not rated as dangerous?