While delayed flights are a nuisance, cancelled flights can ruin holidays, leaving travelers stranded for days at a time. MileCards.com analyzed Department of Transportation records of over 1.5 million U.S. flights during the Thanksgiving and December holidays at the 50 busiest airports for holiday travel from 2010 – 2015 to identify the riskiest airlines, airports, and routes for cancellations.

(Holiday travel periods were defined as the Tuesday before Thanksgiving through the Monday after Thanksgiving, and December 20 – 31 each year.)

Over 3% of regional airline flights were cancelled over the holidays studied, versus 1% for major airline flights. Some routes operated by regional carriers like Newark – Pittsburgh saw 20% cancellation rates, illustrating how a flight on a regional sub-operator is a major risk factor for holiday cancellations.

Spirit has cancelled flights over the holidays at a rate 2x that of other major airlines, and almost 3x the rate of Southwest. Still, Spirit’s cancellation rate is 25% better than the rate of regional carriers studied. And earlier this year it boosted its executives’ incentives for on time performance.

JetBlue, with heavy Northeast U.S. operations, cancelled holiday flights at about 2x the average of major airlines. JetBlue also operates many short flights on its own that are typically handled by regional carriers at other major airlines like United or Delta.

Alaska, Hawaiian the best for cancellations

Flights around the December holidays are cancelled 5x as often as those around Thanksgiving (2.1% of the time vs 0.4% for Thanksgiving). If you have only one holiday to choose for a flight home, make it Thanksgiving.

December 26 and 27 are the worst days for cancellations

With 5% of flights cancelled from December 26 – 27, the two days after Christmas have proven costly and miserable for thousands of fliers. For fliers trying to get home before the holidays, December 23 and 24 have seen the fewest cancellations, while Christmas day is risky with a cancellation rate over 3x that of Christmas Eve.

Around Thanksgiving, the Wednesday before is the worst day for cancellations, almost 2x the rate of other Thanksgiving travel days.

With New York’s airports and Chicago O’Hare often seeing similar storms just days apart, they have cancellation rates about 2x the national average. Newark is the worst of the worst with flights cancelled almost 3x more often than the national average, particularly over the December holiday season when nearly 6% of flights were cancelled.

With cancellation rates less than half the national average, Honolulu, Oakland, and Seattle have kept holiday plans intact.

Among major connecting hubs, Salt Lake City and Denver have the lowest cancellation rates at 0.8% and 1.0%, or 48% and 35% below the national average. 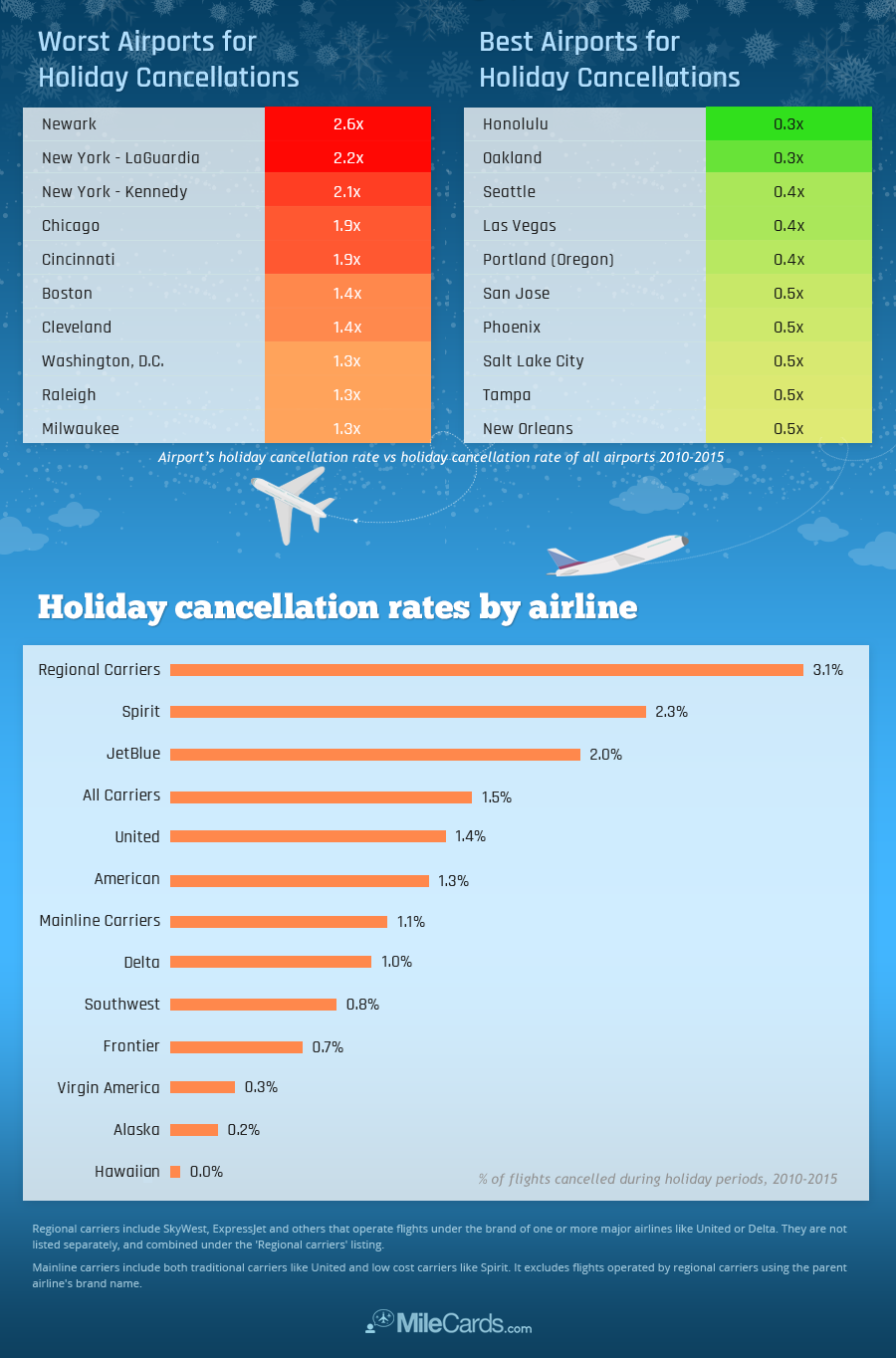 San Francisco to Sacramento and Greensboro to New York – LaGuardia are the worst for cancellations over Thanksgiving, with both cancelled about 8% of the time.

While San Francisco is an easy drive from Sacramento, Greensboro flyers have few alternatives when a flight gets cancelled. 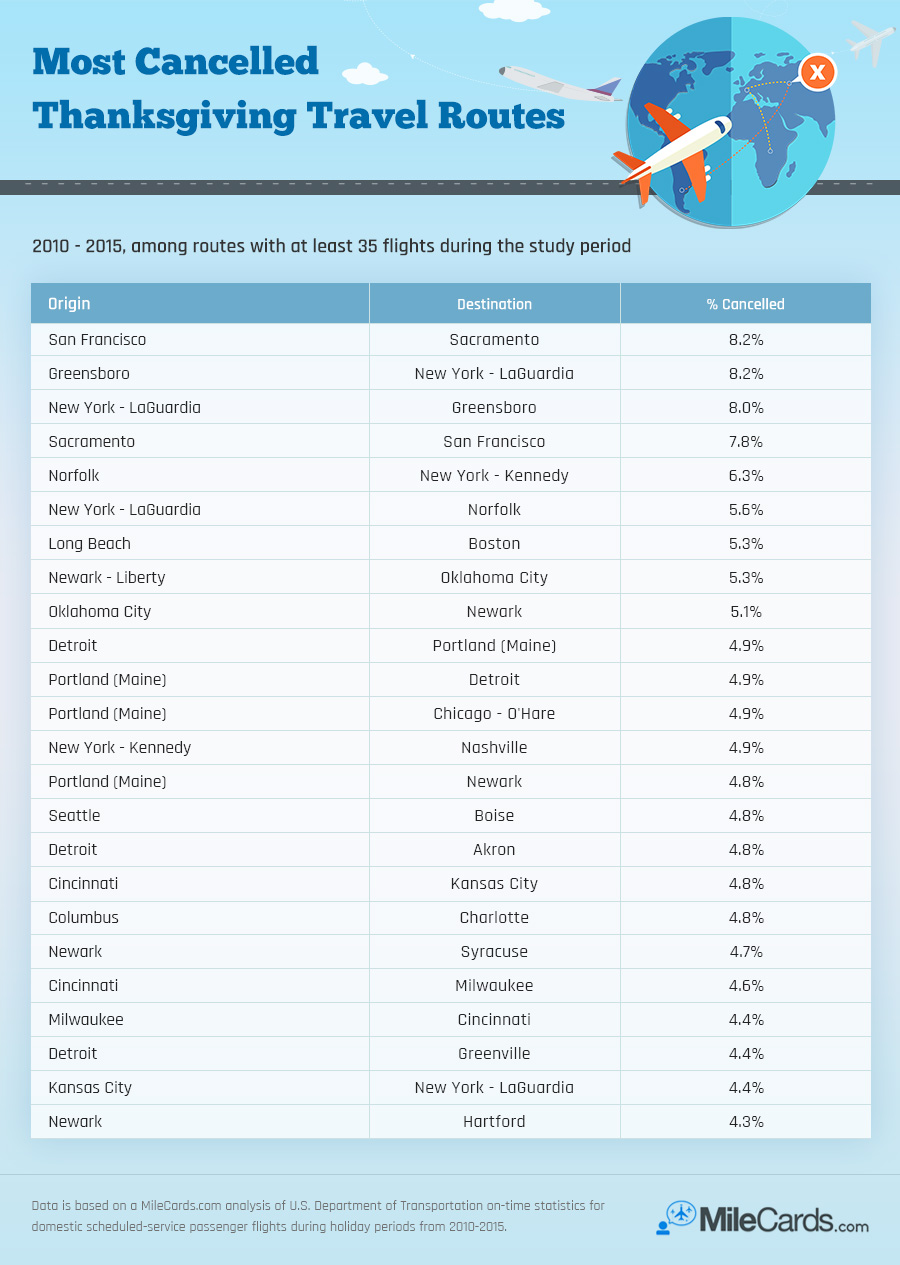 Newark to Pittsburgh, Manchester, and Washington – Reagan flights were cancelled 20%, 17%, and 15% of the time during the December holidays, a startlingly high rate over the course of over 5 years. While all of these cities are within a day’s drive of Newark, when storms strike rental cars are scarce and driving conditions are treacherous. 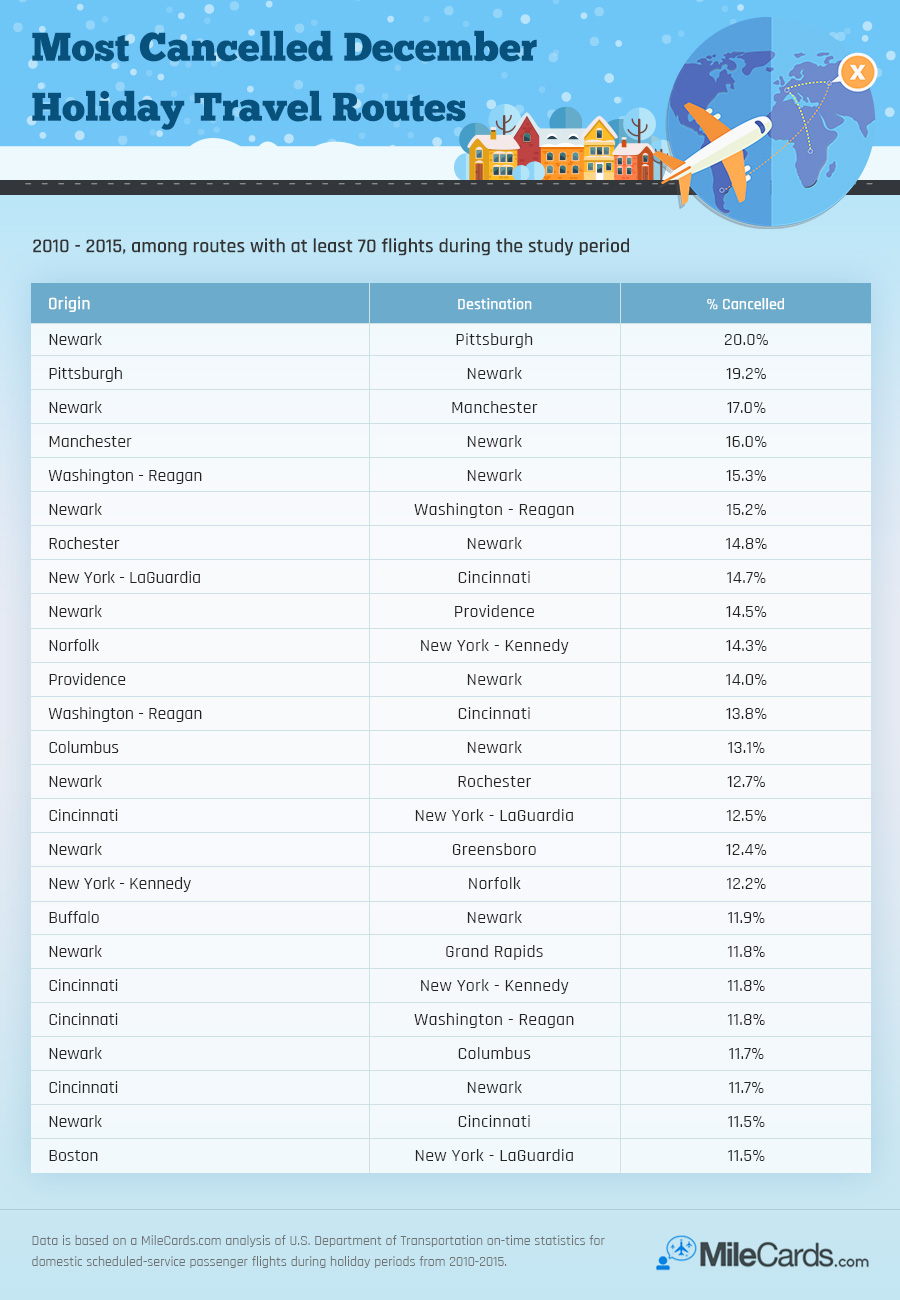 (Ranking is among the 50 busiest airports for holiday travel) 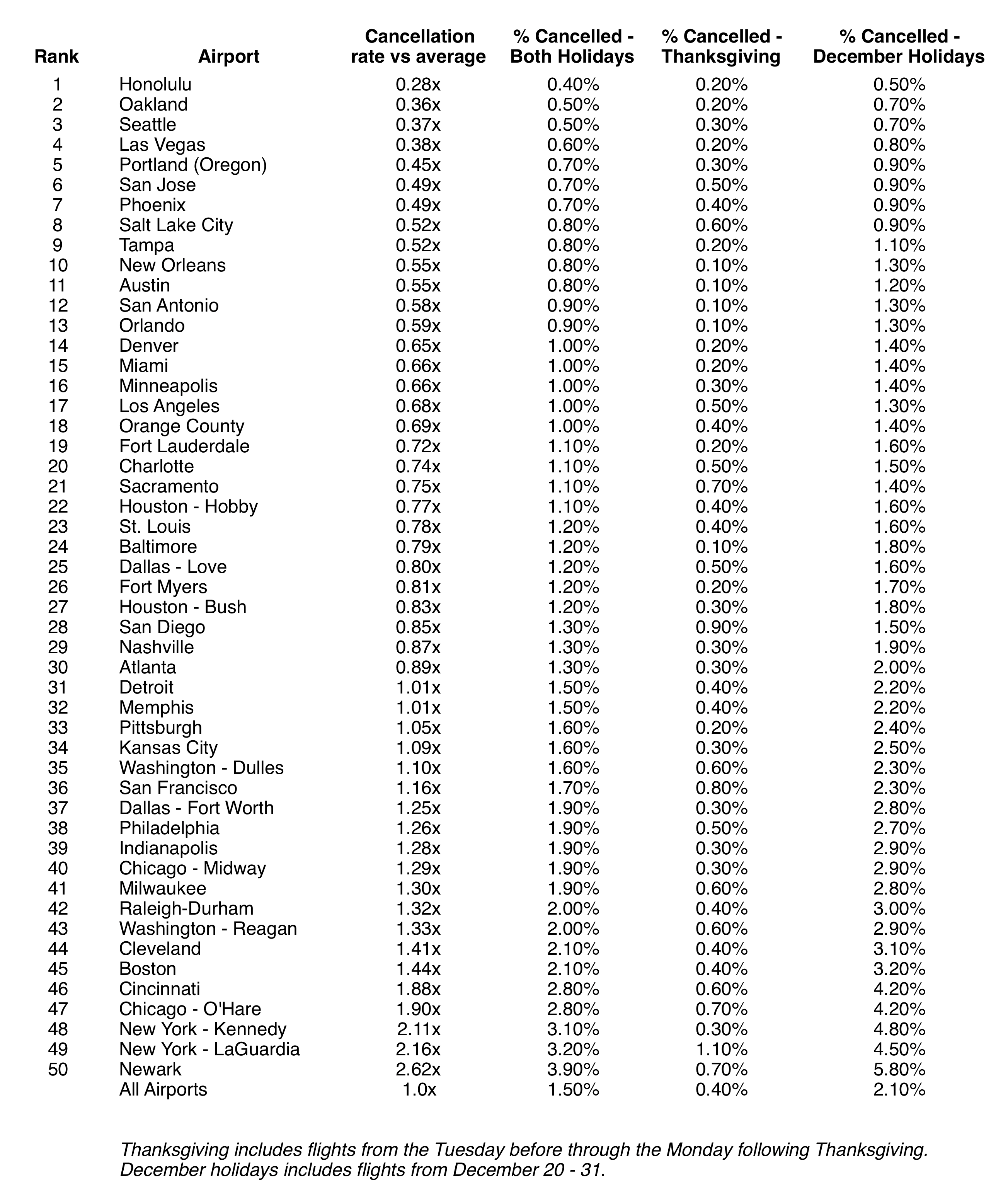 Be alert for regional flights when you book

If you see the words ‘operated by’ or ‘DBA’ when you’re searching for a flight or looking at your itinerary, those are the signs you’re on a regional carrier, which our analysis indicates has a significantly higher risk of cancellation during the holidays. 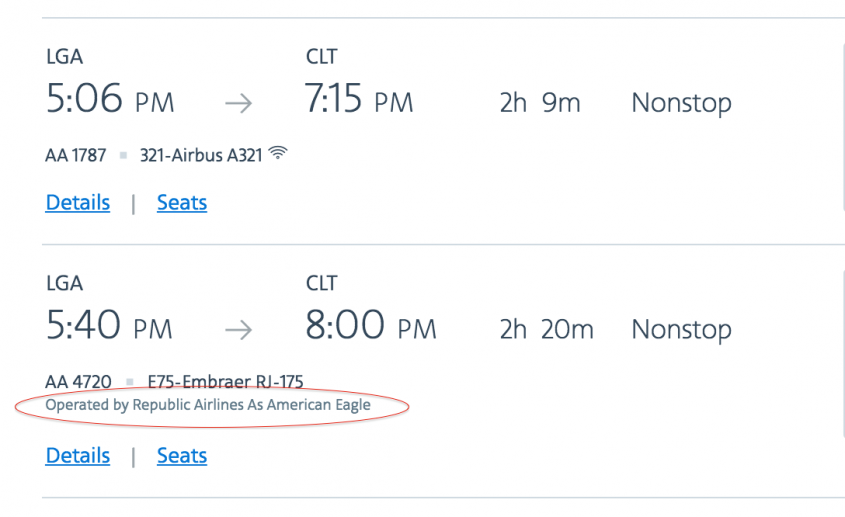 Regional carriers aren’t just for low volume routes and can be found operating flights on behalf of major airlines on many busy routes like Chicago to New York – LaGuardia or San Francisco to Los Angeles.

To make things more confusing, many routes include a mix of flights on regional carriers and the more reliable mainline parent. Pick the mainline flight whenever possible to minimize the risk of cancellations.

Airlines cancel regional flights more often in part because cancelling a regional flight instead of a mainline flight disrupts fewer passengers. Another consideration is that parent airlines don’t have to include regional subsidiary performance in the reliability statistics they report to the government. That’s about to change under rules recently announced by the Department of Transportation, which will require airlines to include all subsidiary ‘code share’ flights to report as part of the parent airline’s statistics. But that requirement won’t be in place for this holiday travel season.

Know where you can rebook

Southwest, Spirit, JetBlue and Frontier have no ‘interline’ agreements with other domestic airlines, so if you get delayed you can only fly one of their own later flights.

If you’re flying American or Delta, you’re in for another complication. The two airlines couldn’t come to terms on an agreement for rebooking, so if you have a cancellation, you can’t ask to get rebooked on each other’s flights. United has rebooking agreements with both American and Delta, giving you more options when delays get bad.

Think of getting rebooked as a negotiation. The first offer you get probably won’t be the best you can do. When cancellations strike, seats are constantly changing hands, so if you don’t like the first rebooking option you get, push for alternatives, or better yet, try again later as things shuffle.

If you’re at the airport when a cancellation hits, you should do three things at once: get in the rebooking line, dial the airline service number and start waiting on hold, and open up the airline’s app while you wait. Sometimes airline apps offer rebooking options right there. And after you’ve been rebooked, keep checking the app to see of better options open up.

You can also keep searching for flights for sale on the airline’s website. The airline won’t put you in a first class seat if there are no coach seats available, but don’t be afraid to ask for a coach seat on flights with very expensive fares. Once a cancellation strikes, just about any coach seat available for sale is up for grabs.

Use a card with the right coverage

Several travel rewards credit cards offer trip delay coverage that can pay for meals and hotel expenses if you suffer a long flight delay. When weather or air traffic congestion causes a delay, the airlines have no responsibility to do anything more than get you on a later flight or refund your ticket.

The 50 busiest airports (defined by the number of flights during the holiday periods studied) were used to compile rankings.

Routes with an average of at least one flight per day over the years studied were considered in the route rankings.

Regional flights are defined as those operated by airlines such as SkyWest, ExpressJet, and others which operate feeder flights on behalf of global airlines like United, Delta, and American.

Mainline flights are defined as those directly operated by the parent airline, and includes both global carriers like United and low cost carriers like Spirit.

Study published with permission by Milecards.com